What Canada Can Learn About Electric Vehicle Adoption from Norway 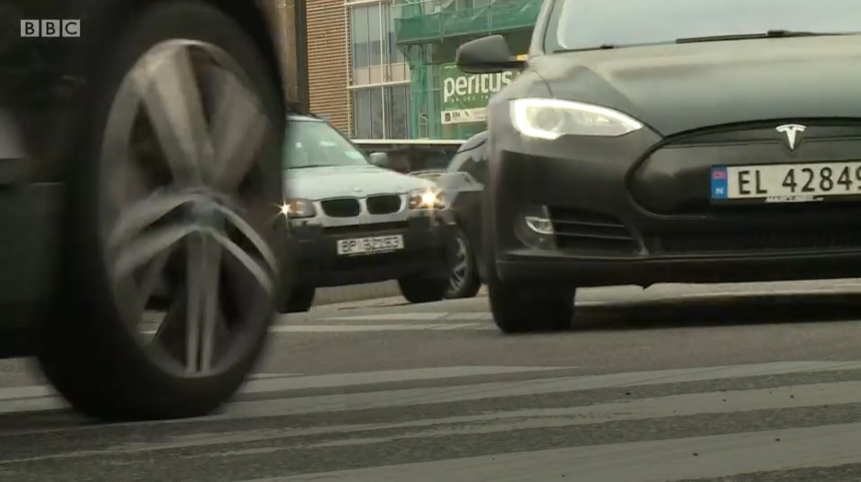 In Canada’s pursuit of a becoming a net zero nation by 2050, eliminating transportation emissions remains an important target. Transportation accounts for about 25% of green house gas emissions in Canada. To combat the emissions spewed from combustion engines, targets have been set for EV adoption in Canada. Ten percent of new cars sold by 2025 are to be electric, with this number rising to 30% by 2030 and 100% by 2040. With the recent news that Quebec will bar the sale of new combustion engine vehicles by 2035, those targets may need to become even more aggressive.

Although electric vehicles are becoming a more common sight on Canada’s roads, EV adoption in Canada continues to lag. In contrast to Canada’s seemingly reluctant uptake of EVs, Norway looks set to meet government targets of phasing out the sale of all new fossil-fuel based cars and light commercial vehicles by 2025. In September 2020, 90% of cars sold in Norway were fully electric or electric hybrid. Like Canada, Norway is a significant oil and gas producer, and the nations share a reputation as cold and ‘wintery’ places. So, what can we learn about from Norway about how EV adoption in Canada might be increased.

Norway’s love affair with EVs began in the mid-90s, when a major publicity stunt brought electric vehicles to the attention of Norway’s consumers and government.

“In 1995, the lead singer of the 1980s band A-ha and the head of the Norwegian environmental group Bellona climbed improbably into a converted electric Fiat Panda they had imported from Switzerland and set off on a road trip.

They drove around Oslo refusing to pay the city’s sky-high road tolls, parking illegally wherever they could, and ignoring every penalty notice they were given. Eventually, the authorities impounded their car and auctioned it off to cover the fines.

But the stunt attracted massive media attention, and the point was made. Soon after, electric vehicles were exempted from road tolls, one of a large raft of incentives that have, over the years, helped make Norway the country with the world’s highest per capita electric vehicle ownership.” – “Norway and the A-ha moment that made electric cars the answer”, The Guardian 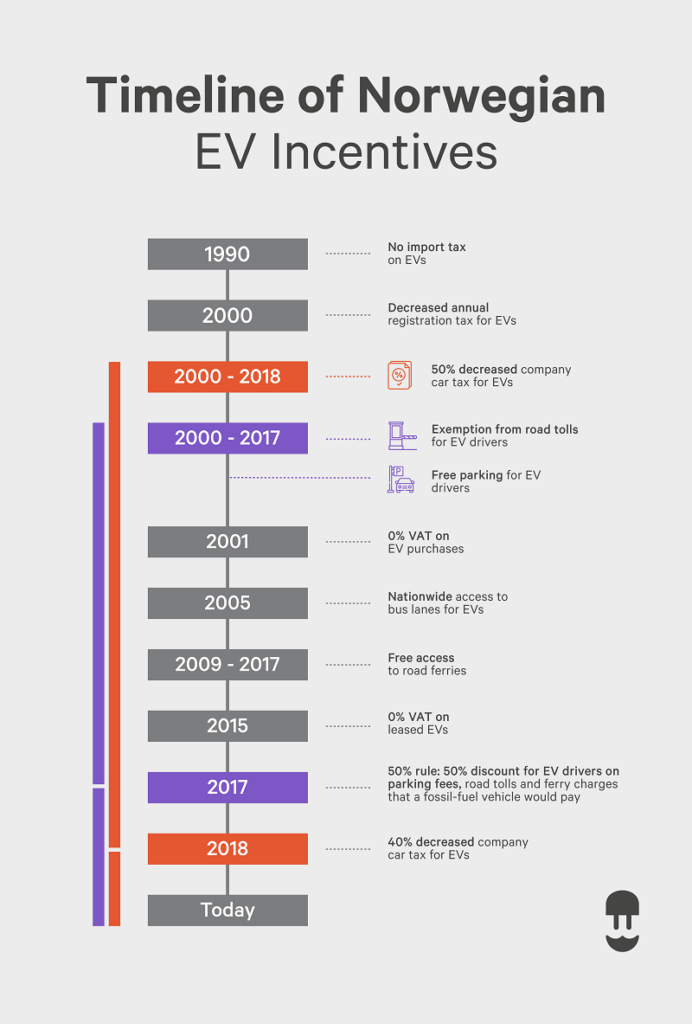 Norway began with a robust program of tax incentives in the 1990s to make the purchase of EVs attractive to the average driver. For example, in Norway, there is no purchase or import taxes on electric vehicles. Further financial incentives include reduced or no fees for toll roads, free parking and charging in many areas, a 90% reduction in road taxes, and discounted company car tax for EV vehicles.

This heavily reduced or tax-free approach to EVs taken by Norway has played a significant role in increasing EV ownership in the country. When the tax incentives for owning an EV are factored in with upfront rebates, “buying a new electric car is more or less the same price as buying a nice petrol or diesel car now,” Christiana Bu, the secretary general of the Norwegian Electric Vehicle Association, told The Guardian.

Along with tax breaks and reduced road tolls, EV drivers in Norway enjoy reduced ferry tickets and can drive in dedicated bus lanes, so long as they also have a passenger. The license plates of electric vehicles all begin with the letter E, making it easy to see which of your friends, neighbours, and colleagues are doing their part to help Norway meet its goals for combustion engine elimination.

Getting the Infrastructure in Place

One variable in the EV equation that cannot be forgotten is that of charging infrastructure. Besides the incentives to drive an electric vehicle in Norway, the infrastructure to support the cars has been effectively built out. The first municipal charging station was built in Oslo all the way back in 2008. Over a seven-year period that number rose to 10,000 publicly available charging stations0.

The Norwegian government has doubled down on the commitment they have shown to build out EV infrastructure by promising at least one fast charging station per every 50 kilometres on major highways. Today, there are more than 15,000 public charging options. Furthermore, municipalities in Norway have put forth grants to accelerate the growth of charging options in housing cooperatives, making it easier and more affordable for Norwegians to charge at home.

Finally, Norway has made strides in helping public transit shift towards full electric mobility. Wireless charging through induction was made available to taxis in 2018. With the wireless charging available, all taxis in the country are set to be electrified by 2023. This is a technology that also has applications for public bus charging in cities.

Norway’s shift to electric transport is hailed as a massive success in the push to adopt cleaner and more efficient transportation technologies. The country’s 2020 gas emissions are looking to drop below 1990 levels as a direct result of the steps taken to electrify transportation. Even as other nations such as the US and China are making gains in EV ownership, Norway remains the world leader in electric vehicle adoption. Many of the challenges inherent to adopting new technologies – faced no matter what country – cost and infrastructure were combated with tax schemes, government grants, lower overall ownership costs of EVs and a progressive population, willing to take up the mantle.

Moreover, the success of EV adoption here helps to assuage the concerns around batteries in a cold, rural geography. Norway is a world leader in electric vehicle adoption and the steps they have taken serve as an example to Canada and the rest of the world in shift to electric transport can be accomplished.

What Should Canada Do?

How would we advise the federal and provincial governments to incentivize EV adoption in Canada? Here’s where we’d start:

Interested in preparing your property or development for EV adoption and the government funding available? Get in touch with our Renewable Energy Specialist, Andrew, for more information.